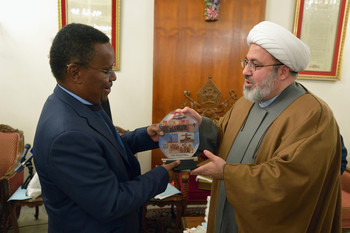 The Rev. Frank Chikane (left), moderator of the Commission of the Churches on International Affairs of the World Council of Churches, receives a memento from Yusef El-Nasar, a Shia Muslim leader, during the visit of an international ecumenical delegation to Baghdad, Iraq, on January 21, 2017. The encounter took place at St Gregory the Illuminator Armenian Orthodox Church. The memento shows images of Muslim troops helping place crosses on Christian churches following the defeat of the Islamic State group in Iraq.