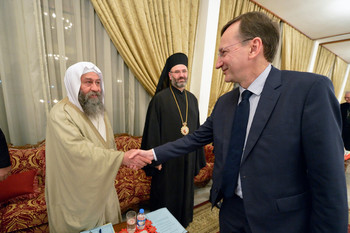 Peter Prove (right) director of international affairs for the World Council of Churches, greets Tarmeda Nadam Kreadi, a leader of the Sabaean-Mandean religious community in Iraq, during the visit of an international ecumenical delegation to Baghdad, Iraq, on January 21, 2017. The encounter took place at St Gregory the Illuminator Armenian Orthodox Church. Looking on is Ghattas Hazim, the Greek Orthodox Metropolitan of Baghdad, Kuwait and Dependencies.