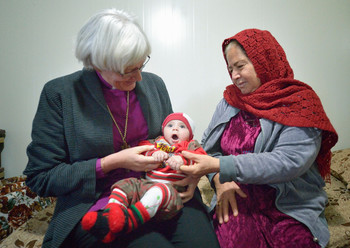 Archbishop Antje Jackelen of the Church of Sweden (left) talks with Azra Said and her baby Jaynar in the Ashti camp for displaced persons in Ankawa, in the Kurdistan region of northern Iraq. Said and her family, who are Christians, were displaced from their home in Qaraqosh in 2014 by the Islamic State group. Jackelen came to Iraq as part of an international ecumenical delegation organized by the World Council of Churches.