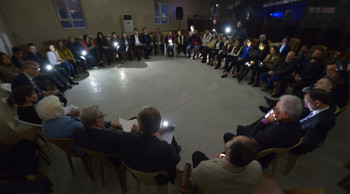 When the power went out, participants turned on their mobile phones to illuminate the room as members of an international ecumenical delegation listen to displaced Christian young people in Ankawa on January 23, 2017, during the group's visit to northern Iraq's Kurdistan region. The delegation was sponsored by the World Council of Churches. The meeting took place in the Mar Shmoni Syriac Catholic Church.