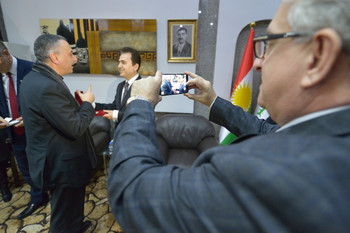 As Dr. Samer Al-Laham, regional director of the Ecumenical Relief Service of the Middle East Council of Churches, records the scene on his mobile phone, Father Michel Jalakh (left), general secretary of the Middle East Council of Churches, greets Pishtiwan Sadiq, the education minister of the Kurdistan Regional Government of northern Iraq, during the visit of an ecumenical delegation to Sadiq's office in Erbil on January 24, 2017. Sadiq is also the acting minister of religious affairs.