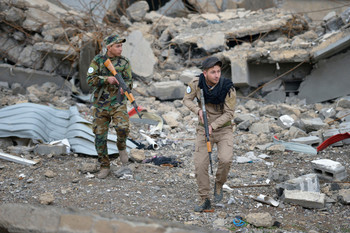 Members of the Nineveh Plain Protection Units, a Christian militia, patrol the town of Qaraqosh, a Christian community that was occupied by the Islamic State in 2014 and liberated by the Iraqi army in late 2016, on January 27, 2017. Residents have yet to return, citing continued insecurity.