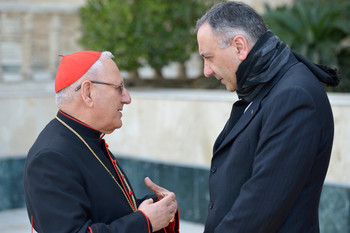 Patriarch Louis Rafael Sako (left), president of the synod of the Chaldean Catholic Church, talks with Father Michel Jalakh, general secretary of the Middle East Council of Churches, on January 22, 2017, during the visit of a high-level ecumenical delegation to Baghdad, Iraq.