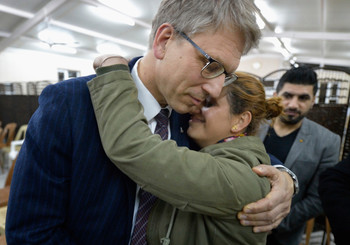 Lubna Yusef, a Christian woman displaced from Qaraqosh in 2014 by the Islamic State group, is hugged by the Rev. Dr. Olav Fykse Tveit, the general secretary of the World Council of Churches, after she told her story to members of an ecumenical delegation on January 23, 2017, during the group's visit to displaced settlements in Ankawa, in northern Iraq's Kurdistan region.