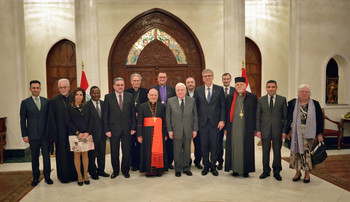 The Rev. Dr. Olav Fykse Tveit, the general secretary of the World Council of Churches, and Patriarch Louis Rafael Sako, president of the synod of the Chaldean Catholic Church, pose with Iraqi President Fuad Masum and other members of an international ecumenical delegation following a meeting in Baghdad, Iraq, on January 22, 2017.