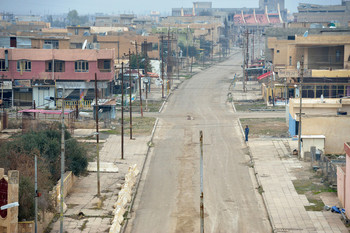 A lone member of the Nineveh Plain Protection Units, a Christian militia, keeps watch on the empty streets of the town of Qaraqosh, a Christian community that was occupied by the Islamic State in 2014 and liberated by the Iraqi army in late 2016. Residents have yet to return, citing continued insecurity.