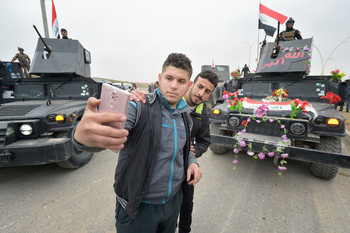 Residents of Mosul, which was occupied by the Islamic State in 2014 and liberated by the Iraqi army in January, celebrate on January 27, 2017, by taking a selfie in front of festooned army vehicles. Although a portion of the city has been liberated from ISIS, fierce fighting is predicted as the army moves to retake the remainder of the city.